You Can Speak English, But You Choose Not To 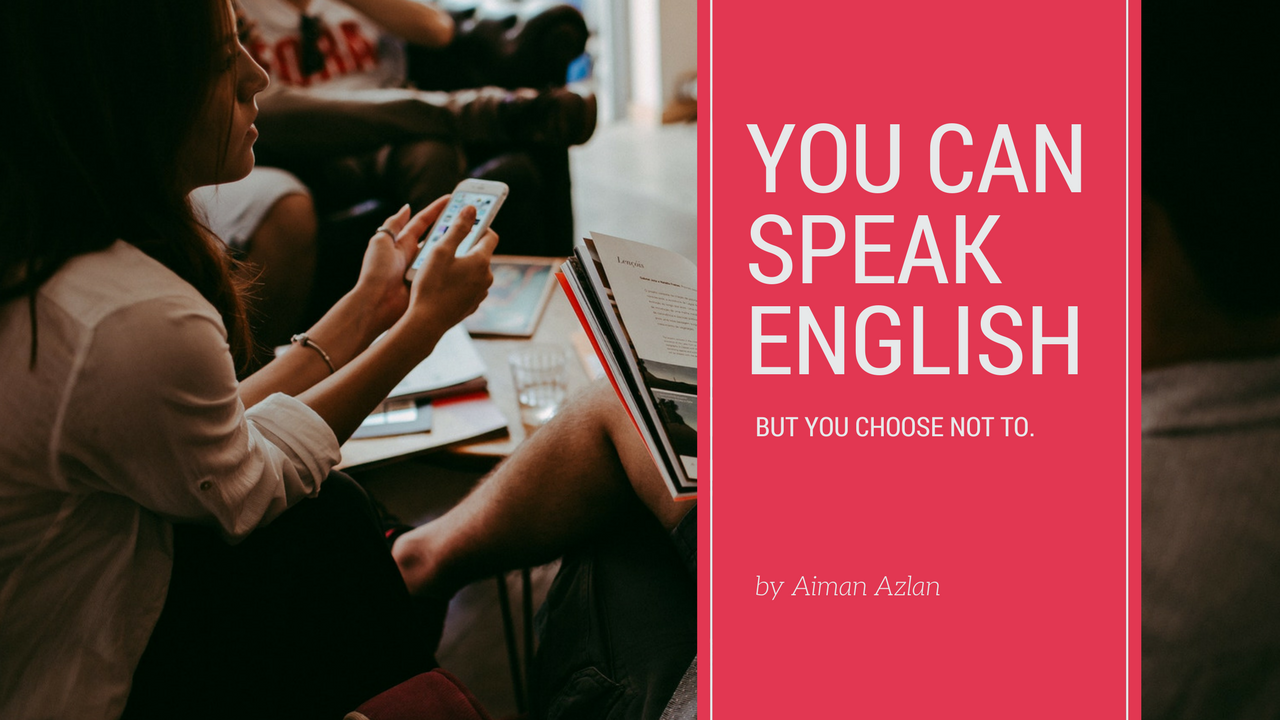 Wanting is one thing, but choosing to do it is another thing. For example, I want to do my assignment but choosing to get up, go to the library, do the research, and start writing is a whole other thing entirely.

I believe that many young people, especially students, are able to speak English. At the very least, they have passed the primary school level of English. Meaning, they know the basics.

They can speak English.

But, they choose not to speak English because of personal insecurities. They perceive themselves as “not good enough” which led them to feeling insecure about themselves.

There are a few common reasons why students feel insecure about speaking in English:

1. My friends will make fun of me.

Undeniably, when you make a mistake, there will be people who will take the opportunity to tease you. There is no way around it other than saying that it is a part of life. Yes, your peers can be cruel. The only consolidation I have to offer is that you have control over what you do.

Quite frankly, that is more than enough to get you moving forward.

You have control over the people to hang around with. If the friends around you are not supporting the good that you do, then you have to ask yourself, “Is that what true friends do?” Then, you have to decide whether or not you want those kind of people in your life.

Toxic friendship is a thing to worry about. We should always think about the people we allow to enter our lives because they will affect us in some way, directly or indirectly. That is our choice and it is the power that we have that many don’t realize.

I don’t know how many times I have met young people who started their sentence with “My English is bad” but then proceeded to speak English in a way that does the job. What do I mean by “does the job”?

The purpose of English speaking is to communicate. If you are able to convey what you want to say to someone and that person understands you, then you have done your job. You have used English (or any other language) in the way that it was intended to be used; as a communication tool.

But I think people have misunderstood what it is for. Instead of a communciation tool, English is now seen as an image booster. That is not what English is for and it is a misuse of the language. People focus too much on how they sound to people, when in fact they should focus more on what message to send to people.

You can sound smart with your fluent English, but if you don’t have any beneficial content to convey to people, then you are not using the language well. It is better to just keep quiet.

I acknowledge that there are people who have difficulties speaking English. They have difficulties understanding how English grammar works, how to pronounce certain words, or how to pick the right words. Sometimes, they might not even know the words.

3. I don’t have anyone to speak English with.

Imagine if they found each other.

But we don’t have to imagine because the reality is, there are people around who are looking for people to speak English with. Many people want to practice English speaking. The challenge is to go out and look for them. Don’t just wait for them to magically pop up.

Lets say, theoretically, there are no one around to speak English with, that is still not enough of an excuse to not speak English. In the age of the internet where boundaries are becoming more and more faded, there are many ways to utilize the internet to practice English speaking.

For instance, you can start a vlogging channel on Youtube and use English in your videos. Fun fact, that is actually how Anwar Hadi practiced his English speaking back when he was still studying to become an English teacher.

When you uploaded your video on the internet, chances are you will find people who have the same interest i.e. wanting to improve English speaking. So by putting yourself out there, you are indirectly inviting them to join your small movement and who knows, you might end up with a small group of supportive friends who will give you valuable feedback about your English speaking.

Other than vlogging, we have livestreaming where you can speak to someone live on the internet using services such as Skype or Google Hangout. But, on an important sidenote, you should exercise extreme caution and pick your speaking partners wisely. Then again, that is a general advice for anything; you should be careful when picking people to become friends with.

But that is a part of the process of polishing your English speaking. You can’t be better if you don’t go through challenges. A knife can’t be sharp without friction. So, you have to learn to embrace that reality as part of the learning process and just keep moving forward.

In order to do that, you have to begin by being confident in yourself.

On that note, I would like to recommend you to check out my FREE ONLINE CLASS on Skillshare about how to build confidence in yourself to speak English, or to do anything really!

I Want to Speak English-lah

Speak Up! Project presents “I Want to Speak English-lah!”, a 3-hour impactful seminar to explore essential tips on how to speak English confidently.